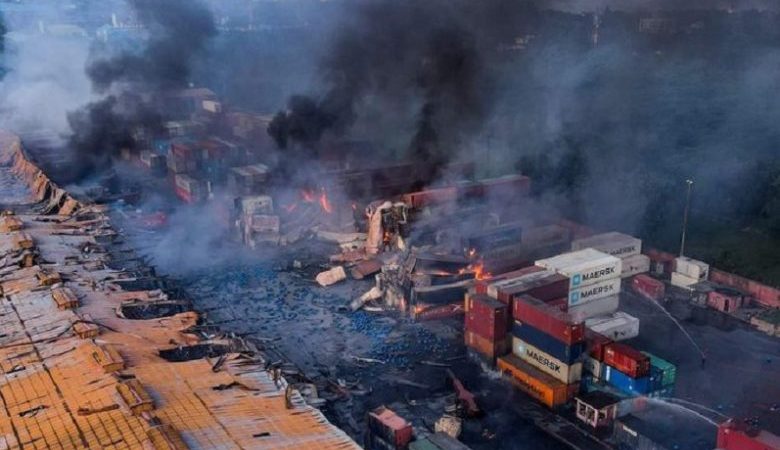 At least 49 people have been killed and hundreds more injured, after a massive fire tore through an inland container depot near the port city of Chittagong in Bangladesh over the weekend.

The fire broke out at BM Container Depot on Saturday night, triggering multiple container explosions that shook the neighbourhood and shattered windows in nearby buildings.

Police and firefighters continued to work over the weekend to extinguish the blaze that also injured more than 300 people as containers filled with chemicals continued to erupt. It is suspected that the fire may have originated in a container of hydrogen peroxide and spread swiftly to other containers.

Among the dead are at least nine firefighters, and the death toll is expected to rise as some of the injured are in critical condition and many people are still missing.

The BM Container Depot, located some 40 km from Chittagong, has been operating since 2011. Bangladesh authorities accused the Dutch-Bangladesh joint venture company of not telling firefighters about a chemical stockpile before it exploded.

Purnachandra Mutsuddi, an assistant director of the Chittagong fire station, told AFP the depot “didn’t have any fire safety plan” and lacked firefighting equipment to douse the blaze.

“The safety plan lays out how the depot will fight and control a fire. But there was nothing,” he said, adding, “They also did not inform us about the chemicals. If they did, the casualties would have been much less.”

Meanwhile, the depot’s authorities said they would provide around $11,200 in compensation to each family of the workers who died in the fire, according to the state-run news agency Bangladesh Sangbad Sangstha (BSS), and also promised to pay between $4,500 and $6,700 to other injured workers.